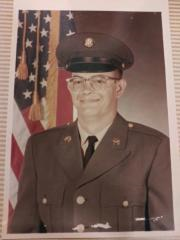 George Richard Nash (DH), 75, of Escondido, CA passed away on May 4th 2019. He was born in San Pedro, California. He is preceded in death by his only son, Richard, parents, Julia Nash & William Nash and Gertrude Nash, and a brother, William (Bill) Nash. DH is survived by his significant other Lynn Hartz of Escondido California, three daughters, Kimberly Victoria of Las Vegas, Nevada, Christine Nash of Twin Falls, Idaho, and Wendy Broe, son-in-law, Greg Broe, of Ramona California, seven grandchildren Rodger, Jordon, Kristin, Porter, Hunter, Rylie and Lyla and two great grandchildren Kairi and Veda, a brother Robert (Bob) Nash and his wife Gerry Nash, and a nephew John Nash.

A Vietnam Veteran and devoted Clamper.  Dick was very proud of his military service as a Ground Crew Chief. His job was performing repairs and maintenance on the Chinook Twin Blade Rotary Helicopter. DH volunteered his time doing work with the Twilight Brigade and Elizabeth Hospice, as well as many other service related volunteerism.  His proudest and most deeply felt calling were the keychains he made. Made with yellow, green and red beads, they symbolized the “welcome home” that many of the Vietnam veterans didn’t receive when they came home from the Vietnam War.  He worked diligently using his own money and time he was estimated to have made 41,000 key chains!  It was his passion along with the love he had for his family and friends.

To send flowers to the family or plant a tree in memory of George Richard Nash, please visit our floral store.