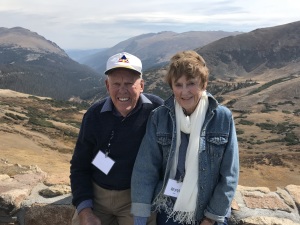 John Douglas Lindstrom, 84, was born a farmer, died a farmer, and loved a lot in between. He passed away November 5, 2018 in a tractor accident at home in his cherished avocado grove in Bonsall, CA. Born July 30, 1934 in Minneapolis, MN, the son of the late John and Sigrid (Johnson) Lindstrom, he was raised on a dairy farm in Braham, MN where he enjoyed twice-daily milking, 4H projects, skiing up-hill both ways to the one room school house, and enduring the antics of his beloved older brother Devore.

John received his BS in Agriculture in 1957 and his MS in Agricultural Economics in 1961 from the University of Minnesota. A member of Alpha Gamma Rho, he met the love of his life, Janice Ogren, at an undergraduate fraternity social, but was slow to close the deal and instead took a three year detour to get his wings in the Navy.

John and Jan met again and later married on August 27, 1960 in Almelund, MN, beginning a life of adventures that brought them ever closer together. Their first daughter, Jana, was born in Atlanta where they had moved after John joined Delta Airlines. Jill and Jodie came later after they had moved to Dundee, IL. They traveled the world, both as a couple and as a family. Looking back on family photos, John’s biggest smiles came whenever he was out supporting his daughters and grandchildren in whatever they did. He was incredibly proud of them.

John’s faith in Christ was the center of his life, and informed all his actions. It led him to an attitude of service in the church, the community, and in our country.

During his 30 years in the United States Navy and Naval Reserve, John amassed more than 10,000 hours of military flight time. First as Commander then as Captain, John held multiple commands before retiring in 1986. Under his leadership as Commanding Officer of Fleet Logistics Support Squadron 51 (VR-51), the squadron won the Noel Davis Trophy (Battle Efficiency Award).

Starting in 1961, John spent 33 years flying for Delta Air Lines. Starting out as a DC-3 Flight Engineer, CAPT Lindstrom Captained many types of planes, finishing up on the MD-11. He served as Chief Pilot, Line Check Airman, Lead Line Check Pilot, Air Line Pilots Association Local Executive Council Chairman, and as base safety representative. By the time he retired, CAPT Lindstrom had flown 25,000 hours of flight time and was regarded as a “Pilot’s Chief Pilot.”

John was an avid and passionate skier, both downhill and cross-country. He was a certified downhill skiing instructor and founded the Delta Air Lines Ski Club. He participated in numerous cross-country races both around the country and around the world and was the U.S. cross-country representative for the Federation of International Skiing. He also officiated the cross-country ski events at the 1980 Lake Placid and 2002 Salt Lake Olympics, and was on the board of directors for the U.S. National Ski Hall of Fame & Museum.

All this time, John still harbored a dream to return to the land. In 1989, that dream became reality. The couple moved to Bonsall, CA and John transformed six acres of barren land into a lush avocado grove trusted by University of California researchers to try out new varietals. Always seeking to go deeper, he served on the boards of Index Fresh, the Avocado Society, the Hass Avocado Board, and the California Avocado Commission. He also regularly attended the World Avocado Congress and in 2008 received the avocado industry’s most prestigious award, the California Avocado Society Award of Honor.

He is survived by his wife of 58 years, Janice, daughters Jana (Russ) Allen of Coronado, CA, Jill Lindstrom of Bethesda, MD, Jodie (David) Frerichs of Los Altos, CA, brother Devore (Janet) of Cambridge, MN, seven grandchildren, one great-grandchild, and many special nieces and nephews. He was preceded in death by his parents.

Celebration of life service to be held at Emmanuel Faith Community Church, 639 E 17th Ave, Escondido, CA, Thursday, November 15, 2018, 11:00 with a reception following at the church.

To send flowers to the family or plant a tree in memory of John D. Lindstrom, please visit our floral store.