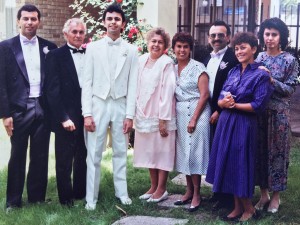 Maria de los Angeles Carrillo-Soberon age 98 passed away peacefully Monday morning September 30th, 2019, at Villa Pomerado Care Center, two days before her 99th birthday. She was born in Matamoros, along the Texas/Mexican border near Brownsville, TX on October 2, 1920, the Feast Day of the Holy Guardian Angels.  She was one of 8 children and grew up during the depression. Her father died when Maria was very young, and because of economics, Maria went to live with her affluent aunt and uncle after her sisters died of Tuberculosis.

She was an accomplished dress maker since she was a teenager and made her own clothes with fabrics imported from Paris and England. She became a seamstress and contributed to the war efforts by sewing insignias on military uniforms.  She married Candelario Carrillo-Soberon when she was 20 yrs. old.  She later became an accomplished tailor and worked for high end shops tailoring men’s suits.  She worked in Austin, the capital of Texas, and many of her clients were the state’s political leaders.

Maria was a dedicated wife and mother.  She lived in Mexico, California or Texas her whole life.  She was married for 55 years, widowed at age 75.  They raised six children - 3 boys and 3 girls.  She was a devout Catholic and had a great love for the Blessed Mother.  She prayed the rosary faithfully for her family every day, especially for her children.

Over the years, Maria lived with her children for various amounts of time.  However, the last 3 years of her life, she required a higher level of care, and was in an assisted living facility.  She received Holy Communion every Sunday and received the anointing of the sick shortly before she died.

The Soberon family would like to extend our sincere gratitude to the Villa Pomerado Care Center nurses and staff who took great care of Maria the last 3 years of her life.

Family and Friends are invited to celebrate Maria’s Funeral Mass on Friday Oct. 11th, 2019 at St. Gabriel’s Parish in Poway, CA at 10:00 am.  Please see Service Details on the Website.

To send flowers to the family or plant a tree in memory of Maria Carrillo-Soberon, please visit our floral store.