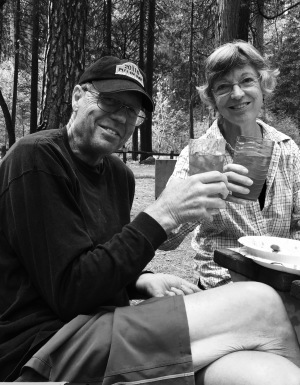 Robert “Bob” Engberg passed away after a brief but courageous battle with AML/acute myeloid leukemia. He will be remembered for his passion for climbing mountains and car racing, and boundless energy to travel and camp with his wife Sherry in their Volkswagen Westfalia. Bob was hiking mountain trails up until his diagnosis, climbing a portion of Mount Shasta in June 2019.

Bob was born in San Diego to Marynell and Vanus Engberg. He grew up in Spring Valley where he graduated in 1961 from Mount Miguel High School. He earned a scholarship to the University of Redlands, where he earned his bachelor’s degree in history and played varsity basketball, graduating in 1965. Bob married his high school and college sweetheart Sherry Netzley shortly after graduation. They moved to Seattle where Bob received a master’s degree in history from the University of Washington in 1967. He and Sherry enjoyed camping and  backpacking around Mt. Rainier in their spare time.

Bob taught several UC extension classes, both online and in Yosemite. For years he took students to the Yosemite Institute each spring for a week of  camping, hiking, and history.  Summers were filled with roadtrips to state and national parks where he camped with Sherry and their two children.

Bob focused his scholarship on the life of John Muir, the “Father of the National Parks.” He authored and edited three books on Muir’s life and writings. Bob’s students and children learned an endless supply of John Muir quotes, such as “Climb the mountains and get their good tidings.”

A modern day Renaissance man, Bob learned to speak French as a college student while working in Paris as a restaurant dishwasher.  Bob and Sherry returned to France several times to visit their “famille francaise” that they met during international exchanges. Inspired by the museums, Bob studied European art and architecture, and helped establish advanced placement art history programs at high schools across the country.

Bob developed a love of car racing in the 1960s, taking weekend trips to race in Holtville with his brother Chuck. After the kids were out of the house, he restored and raced three vintage British race cars, a Lotus 11, a Lotus 23 and an Elva Mk II.  Bob competed in vintage car races throughout the country, towing the cars behind their VW Westy.

Bob  and Sherry designed and built their home in Julian where they have lived for 20 years.

Bob will be loved and remembered by his wife Sherry, children Brock and Catherine (and Tom), siblings Marilyn and Chuck, and grandchildren Elsa and Cedric. Memorial services are planned for this fall. In lieu of flowers, the family suggests donations to the Yosemite Conservancy, University of Redlands, or your favorite charity.

To send flowers to the family or plant a tree in memory of Robert Bob Engberg, please visit our floral store.

You can still show your support by sending flowers directly to the family, or by planting a memorial tree in the memory of Robert Bob Engberg
Share a memory
© 2020 California Funeral Alternatives. All Rights Reserved. Funeral Home website by CFS & TA