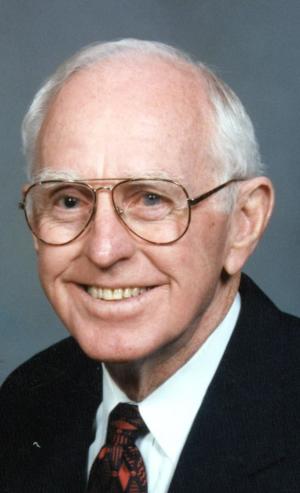 A. Nelson Smith, Jr., 96, of San Diego, CA and former 54-year resident of Rockford, IL passed away on February 18, 2020.  He was born April 26, 1923 in Winterset, IA to Ambrose Nelson Smith, Sr. and Lillian Miles Smith.  Nelson graduated from Dunlap High School, Dunlap, IA in 1941.  He attended Coe College, Cedar Rapids, IA, served in the Army Air Corps during World War II and graduated from the University of Iowa in 1947 with a Bachelor of Science degree in Commerce.  He was a member of Phi Kappa Psi fraternity, played halfback for the University of Iowa football team and also ran track for the Hawkeyes.

Nelson married Barbara Jeanne Bygrave in Lansing, MI, May 27, 1950.  They resided in Park Forest, IL, Elmhurst, IL and Bartlesville, OK while he was employed by Phillips Petroleum Company.  They moved to Rockford, IL in 1958 and founded Rockford Oil Company where he served as President until his retirement in 2005.

Nelson loved family and sports, enjoying the competition and camaraderie of playing golf, basketball at the YMCA well into his fifties and tennis five days a week until 89 years of age.  In addition, he loved playing with, watching and supporting his children and grandchildren in their many athletic endeavors.  He was a lifetime supporter of the University of Iowa athletic teams, scouting young talent for the men’s football and basketball programs and holding season football tickets for over 60 years.

Arrangements are pending with California Funeral Alternatives, Poway, CA and a private service will be held at a future date.  A special thanks for the loving care and compassion shown to Nelson by the wonderful staff at Wesley Willows, Casa de las Campanas Health Center and The Elizabeth Hospice.

To send flowers to the family or plant a tree in memory of A. Nelson Smith, please visit our floral store.

You can still show your support by sending flowers directly to the family, or by planting a memorial tree in the memory of A. Nelson Smith
Share a memory
© 2020 California Funeral Alternatives. All Rights Reserved. Funeral Home website by CFS & TA