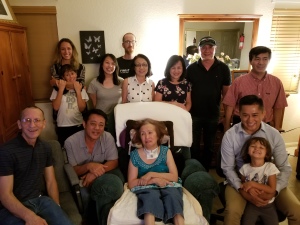 Christine Ha-Le Koenig, 67 - passed away peacefully and with dignity after a courageous 20 year fight with Multiple System Atrophy (MSA), under the loving care of the Palomar / Pomerado hospital ICU team in Poway, California on March 31, 2020. Christine was born as Le Ngoc Ha on July 29, 1952 to Ngo Thi Tuoi and Le Van Xa in Tây Ninh, Vietnam.

Christine is now free from the disease that was so unmerciful and took so many things away. After her death, she still showed what a loving and compassionate person she was with the donation of her brain to Multiple System Atrophy research – in the hope that somehow she could help others could be spared such suffering. Hers was the first MSA brain tissue donation in over 10 years, with only 6 tissue donations in the last 30 years of the effort – she is a true hero to her family and friends, and many people she will never know will hopefully benefit from this selfless and kind act.

Christine spent her childhood in Tây Ninh, Vietnam with her family. The family had many different support mechanisms to keep them busy - coffee and tea, rubber tree and sugarcane plantations – as well as Caodaism - which their Father Xa played a major role in leading.

The Notre Dame Des Missions (NDDM) Boarding School originally in Thu Duc created many lasting relationships for Christine during her teens that she cherished for many years. She was instrumental in starting a reunion of the boarding school members, and started the initial web page to gather members together via address sharing and use of personal contacts of family and friends. One of the initial small reunions was held at Christine’s home in San Diego, with one of the teachers – Sister Euphrasie – attending and demonstrating a memorable exercise routine.

Christine was married in Vietnam and had Hoang in 1974, spending a difficult time during the war living in a time of chaos and raising a family.  She left the country and spent some time in a refugee camp in Indonesia where she was active and helped by providing her skills for teaching children in the camp. A number of her siblings also spent time at the camp while all were headed for America.  In 1982, Christine made it to the states, with Chris born in 1983.  She raised Chris with the help of her family as they arrived in the states, putting herself through college as well as helping her family attend college.  Christine obtained a number of Associate’s degrees, a Bachelor’s degree in Electrical Engineering, a number of Engineering Certificates, as well as was working on her Master’s in Electrical Engineering when she became ill in 2000. She was also an accomplished pianist and loved to play, making music until her disease made it impossible for her to keep time.

Christine was at her initial engineering job for Integrated Microwave Corporation and met Todd in 1990, designing many RF Filters for the military and commercial industry (even designing and tuning some ceramic filters and diplexers for a customer named Qualcomm). Christine and Todd were married in 1995 and moved into a home in the Rancho Bernardo, California area. Christine attended UCSD and SDSU for further Engineering studies, and was working on her Master’s degree when she had initially minor symptoms of her disease in 2000.  The symptoms rapidly progressed beyond a standard Parkinson’s path (the initial rough diagnosis), with Christine appreciating the help in daily activities of cart transfer and help around house from Y while he lived with Christine and Todd in Rancho Bernardo. The diagnosis of MSA in 2003 led to a trip to Europe with Wes Koenig (Todd’s Brother) in 2005 and a trip to her homeland of Vietnam in 2007 with Wes, Todd, and her Sister Kim (Thu). Christine appreciated the chance to travel with Todd, Wes, and Kim.

Her symptoms led to a visit to the ICU in the summer of 2008 - resulting in a stay in various nursing homes from 2008 to 2012, when the family was lucky enough to bring her home to care for her. She battled the disease and related issues such as pneumonia and infections until her passing in 2020 - loved and supported by her husband Todd, her sister Kim (Thu), Wesley, and her long term Caregiver Belen Ramirez. Christine enjoyed many visits from her relatives and friends - and understood their sacrifice in visiting from far away locations involving long flights and car travel in the San Diego, Murrieta, Garden Grove, and San Jose areas as well as locations across the United States, Canada, and Europe – your visits always brought a smile and happiness to Christine.

Our thanks to all of the great Hospitals, Doctors, Dentists, Nurses, Physical therapists, home care nurses, caregivers, nursing homes, medical departments, and friends and family that helped keep Christine with us for so many years. Her care was supported by literally hundreds if not thousands of people, we are forever indebted to your loving support.

There will be a memorial service for Christine after the COVID-19 Pandemic is over. In lieu of flowers we ask that friends donate in Christine’s name to the search for the cure to MSA at https://www.multiplesystematrophy.org/msa-donation/

To send flowers to the family or plant a tree in memory of Christine Ha-Le Koenig, please visit our floral store.

You can still show your support by sending flowers directly to the family, or by planting a memorial tree in the memory of Christine Ha-Le Koenig
Share a memory
© 2020 California Funeral Alternatives. All Rights Reserved. Funeral Home website by CFS & TA