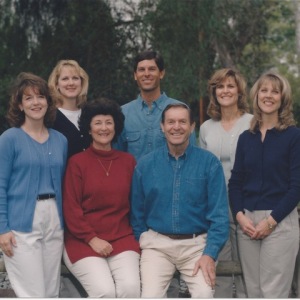 On January 1, 2021, Graydon Calder passed away at the age of 91.  He was an extraordinary, accomplished and loving father, grandfather, and great grandfather that lived a full and rich life.  His philosophy in life was to live in such a way that would bring happiness in this life and in the life to come. He balanced his family, church, profession and personal life beautifully while always putting his family first.

Graydon was born in Logan, Utah to Ken and Kay Calder and was a long-time resident of San Diego, having moved here from Logan in 1937. He attended Jefferson Grammar School, Roosevelt Junior High, San Diego High School and San Diego State College. He has always enjoyed sports and while at San Diego High School he broke several local and state records in the high jump.

Graydon met the love of his life, Joan Woods, and they married in 1952.

He served as an officer in the U.S. Air Force from 1952 to 1956.  He graduated from  Officer Candidate School as number one in his class of 443, receiving both the top academic award and the Distinguished Graduate award.

Graydon helped run the family business, Calder’s Toy and Candy Stores before entering the financial planning business in 1961.  This was the beginning of a long and successful career filled with many recognitions and awards.  He was one of the early pioneers of the financial planning profession.  In 1970 he established the San Diego chapter of the International Association of Financial Planners, the oldest continuing chapter in the United States.  He was among the first 42 people in the U.S. to receive the Certified Financial Planner (CFP) designation in 1973. He was honored by his peers as national “CFP of the Year” in 1975 and again in 1982.

In 1973 Graydon formed Financial Planning Consultants, which is San Diego’s oldest financial planning firm.  He retired in 1995 and turned his practice over to his son-in-law, Douglas Jarman, CFP.

Graydon was a man of faith and served in many capacities in the Church of Jesus Christ of Latter-day Saints. He filled two missions to Australia for the Church…the first when he was a young man and the second with his wife, Joan.

Graydon had many talents and hobbies that brought him, and all who knew him, great joy.  He had a passion for videography and storytelling.  All of the special moments in his life and his family’s have been lovingly recorded and made into movie treasures to be watched over and over again.

He was an amazing craftsman and woodworker and shared this talent with many.  One year, he handcrafted every Christmas gift for his 5 children and 19 grandchildren.  These beautiful, handcrafted wood treasures will be passed on for generations to come.

Graydon was a perfect example of someone who “works hard and plays hard.” He and Joan traveled extensively and he enjoyed sports of every kind.  He loved church softball and basketball, golf, tennis, snow skiing and most of all, anything that involves water. Whether it was snorkeling in La Jolla Cove, waterskiing at Mission Bay, tubing down the river in Ogden, jet skiing at Lake Tahoe, boogie boarding at Newport Beach, bodysurfing at Del Mar, swimming laps at the Del Cerro Pool, snorkeling with giant rays and sharks in Tahiti…he loved it all!  He taught his family to love the water and to ALWAYS pack a swimsuit.  He passed this passion of travel onto his children and took them with him on many of his adventures.

Graydon created a “Calder” legacy that will inspire generations to come and we as his family all aspire to continue to add to his legacy. In one of his grandson’s words, “I strive to follow Grandpa’s example—To live a life worth reliving.”

A graveside service will be held for Graydon on January 23, 2021 at 1:00 p.m. at Greenwood Mortuary, located at 4300 Imperial Avenue, San Diego, CA, 92113.  Due to the need to limit our guests we are asking only family members to attend.  For those that are interested in a Zoom link to watch the graveside service, contact vickilparker@gmail.com.

To send flowers to the family or plant a tree in memory of Graydon K Calder, please visit our floral store.