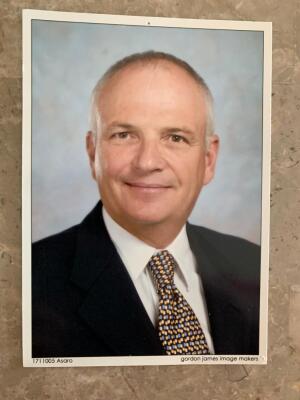 A periodontist in the Town of Tonawanda for over thirty years, Dr. John Asaro passed away Sunday, May 24th from COVID-19.  Dr. Asaro was a skilled clinician admired by his patients, and respected by his colleagues for his conservative treatment approach.  While maintaining his private practice he was also a Clinical Assistant Professor in the Post-Doctoral Periodontics Clinical Advanced Education Program, as well as Pre-doctoral Periodontics, at the State University of New York at Buffalo School of Dental Medicine.  He was awarded emeritus status in 2013.

A graduate of Georgetown University and the State University of New York at Buffalo School of Dental Medicine, he is remembered by his colleagues for his selfless service to the profession at the local, state and national levels.  He was elected President of the Eighth District Dental Society in 1993 after serving on its Executive Council for seven years.  Dr. Asaro served on the New York State Dental Association’s Board of Governors for six years culminating in his election as Secretary-Treasurer of the Association.  He held several positions in other state dental committees and councils and lectured state-wide on risk management.  At the national level, Dr. Asaro was a Trustee on the American Academy of Periodontology’s Board of Trustees from 2008 – 2010.  He held other positions in the AAP concentrating on patient advocacy and dental benefit programs.  Dr. Asaro also served in the American Dental Association’s House of Delegates for fifteen years.

In addition to his professional activities, Dr. Asaro had a number of other interests which he pursued with passion.  An avid fly fisherman, he traveled throughout the US, Canada, Mexico and even Europe in pursuit of the perfect catch.  He became an official for the US Cycling Federation, rising in stature to become one of the highest ranking officials in the US.  He officiated at a number of world class championship cycling events.  Cycling officials ride motorcycles while refereeing events, so Dr. Asaro’s stint as an official intensified his love of riding which culminated in a solo cross country motorcycle trip.  Dr. Asaro loved his six Jack Russell Terriers and toured the Northeast to compete in sanctioned dog agility trials, winning several championships.

Dr. Asaro was an accomplished chef specializing in Sichuan cuisine.  His often elaborate meals were crafted in the presence of one of his other loves, music.  Whether in the office, at home or in the car, Dr. Asaro’s love of music was apparent to everyone, as was the fact that it made no difference what genre.  Jazz, classical, rock-and-roll, country, all gave him pleasure

.Born to parents Philip and Winifred, and raised in Brooklyn, Dr. Asaro was married fifty-one years to Eileen McKee, his first love who he met at the Jersey shore at age thirteen.  They raised two children, Tricia and Christopher, in Buffalo after relocating here for Dr. Asaro’s professional studies.  There was a special place in his heart for his two grandchildren, Kate and Jack, who managed to spark a twinkle in his eyes even as his illness worsened.

All this talent, all this passion and all this spirit waned over the last ten years as Alzheimer’s took its toll.  Dr. Asaro passed away in Silverado Escondido Memory Care Community in California where he has been a resident since 2015.  Memorials can be made to the Alzheimer’s Association: alz.org; or the New York State Dental Foundation: nysdentalfoundation.org.

To send flowers to the family or plant a tree in memory of John Philip Asaro, please visit our floral store.

You can still show your support by sending flowers directly to the family, or by planting a memorial tree in the memory of John Philip Asaro
Share a memory
© 2020 California Funeral Alternatives. All Rights Reserved. Funeral Home website by CFS & TA