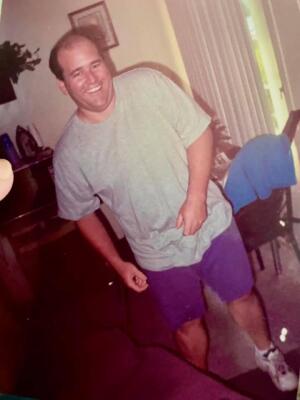 Joseph “Joey” Lawrence Briese, age 57, of Ramona, California passed away Saturday, October 23rd, 2021 from complications of Type 2 diabetes. He will be remembered as a loving son, husband, father, brother and teacher/coach with a smile that lit up a room.

Joey was born in El Centro, California to Eileen Staiger (Swartz) Briese on April 5th, 1964. Joey attended school in Brawley, California, where he was also known by “Joey Swartz”. He was adopted as an adult by Eileen’s husband, Ernest Briese, on April 25th, 1997 changing his legal name to Joseph Lawrence Briese while mutually adopting his new father, Ernest Briese, also known as “Ernie” and “Dad”. Joey attended Primary School in Brawley, California and he graduated June, 1982 from Brawley Union High School. He played on the Brawley High School Football team and the Tennis Team, as well as being a member of the Madrigals performance group while he attended high school. He began coaching Little League baseball teams after he finished high school. He also coached other teams in basketball, tennis and football beginning a legacy as a coach. He attended classes at Coleman College and Imperial Valley College concurrently earning a Computer Science degree later using his degree to get a job with Chipsoft as a software quality assurance analyst. He used his previous educational progress to later get two bachelor’s degrees in Computer Science (Coleman College) and Business (University of Phoenix).

Joey married Mindi Donnelly September 27th, 1997 at Mary, Star of the Sea Catholic Church. He and Mindi met in 1994 while working at Intuit/Chipsoft in San Diego, California, where they both worked in the IVV department and became friends before they began dating. The pair found they had much in common, including strong family ties, love of children, dogs, travel, theme parks (including a mutual love of Disney parks) and roller coasters, and they soon fell in love, marrying in 1997. The pair were interested in sharing their lives and building a family. They purchased the house in Ramona and customized the landscape and house together with Ernie Briese. The wedding was lovely, and the reception was held at their home in Ramona. Many people helped with the union of the happy couple making the celebration the event of the decade! They went to Disney World on their honeymoon to visit a favorite vacation spot and had a two-week adventure. They were off to a great start and decided to concurrently foster and adopt a pair of biological siblings from San Diego County. Joey and Mindi became parents to Kim (age 6) and Jonathan (age 4) when they arrived in September 2000 when he was 36 years old. He was a highly involved father, providing guidance in religious activities, academics and of course, acting as a coach in athletic activities. After a few years, they even rescued a lovely large “puppy” Bruce Wayne. Family life included weekend sports, scouting, movies, school and homework, vacations to Disneyland and Disney World. The children grew up, obtained jobs and moved to Arizona. After the “puppy” Bruce Wayne passed away, two more puppies were rescued Robin and Alfred Pennyworth. Joey and Mindi went on to volunteer to foster puppies for a local rescue organization, eventually rescuing the next family puppy, “Princess Jasmine”. She soon became a beloved family pet. Life settled into a pleasant routine for Joey with tennis, while he and Mindi found time to get away to Disneyland to spend quality time together, make trips to see family in Arizona, local concerts, and movies, and even spending quiet evenings making dinner and desserts together. Joey and Mindi were happily married for 24 years until his untimely passing.

Joey was a very successful coach throughout his life. He first became active in the Ramona community sports leagues after the children arrived in our home and began coaching in Ramona acting as a soccer coach for the children’s teams, as well as becoming an active member and later the President of Ramona Soccer League. He started a travel soccer team called “Intra” with his RSL team as the basis for his travel team. He coached the team from 2007 through 2009, taking a bronze trophy in a 2008 tournament. Some would say “once a coach…always a coach” and as the sports “seasons” changed, he switched to the next sport from soccer in the fall, basketball in the winter, spring soccer and tennis, and golf in the late spring. Joey enjoyed his coaching activities while working as a software quality analyst and tech support guru, making his next career move to Julian’s High School Varsity Men’s Soccer Coach staying for ten years. Soon an opportunity opened at Ramona High School Junior Varsity Tennis coach where he coached for 3 years. Joey had another opportunity where he rose to the challenge with University City Girls Varsity Head Coach where he built the program from the ground up. He began with the Girls program to include a varsity squad and a junior varsity squad finishing in the top of the CIF regional division in a few short years. He was soon handed the Boys squad, and that program blossomed as well. Each season his teams had more kids qualifying for the CIF regional tournament and playing post-season tournaments. He was very pleased with the progress that team made as they moved up in the rankings and gratified with the support of the school and the tennis community.

Joey was an avid volunteer in the tennis community, volunteering as a ticket taker, usher, “bouncer” and credential coordinator at two WTA tournaments, the Mercury Insurance tournament at Omni Resort, San Diego and another in Hawaii. He enjoyed the opportunity to see the professional tennis and the interaction with the community, one year earning the “volunteer of the year” trophy. He was truly proud of his contributions.

In lieu of flowers, the family asks that those inclined to charitable donations please send donations to American Diabetes Association and we also ask that you get involved in your community to support youth activities.

To send flowers to the family or plant a tree in memory of Joseph Lawrence Briese, please visit our floral store.