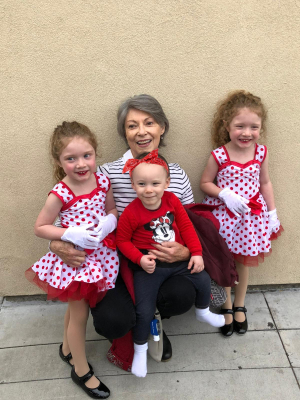 It is with indescribable sadness that we share that Luz del Carmen Williams passed away from metastatic breast cancer on Thursday January 28, 2021. Luz was the epitome of strength and resilience during her almost 20 year battle with breast cancer. Her hospice nurse aptly stated that she died as gracefully as she lived and truer words have never been said.

Luz is survived by her loving husband, Marty Williams; her son Marty Williams Jr, daughter-in-law Sara Williams and their daughters Lily and Sofia Williams; her daughter Pamela Trice, son-in-law Christopher Trice and their daughter Emory Luz Trice; her sister Celia Pedroza Soberanis and her children Celia Gallardo and Luis Antonio Gallardo, along with many more loving relatives and friends. Luz is preceded in death by her father, Arquitecto Jose Carlos Pedroza Aguayo and her mother Celia Soberanis de Pedroza.

Luz was born in Mexico City, Mexico and raised in Acapulco, Gro. Mexico, where she attended The Mac Gregor School. Luz spent a year in Wheeling, West Virginia as a foreign exchange student where she attended Mount de Chantal Visitation Academy. Luz attended high school in Mexico City at Colegio Ignacio L. Vallarta . Luz then studied at the Berlitz Institute of Languages in Mexico City and the Goethe Institute in Passau, Germany, where she completed training as a professional interpreter and translator. Luz was fluent in Spanish, English, French and German. Luz returned to Acapulco where she worked in public relations for the Acapulco Princess Hotel. It is there that she met her loving husband Marty Williams. Luz moved to New York City after marrying Marty Williams and worked as a translator and interpreter for Bank of America at the World Trade Center. Luz and Marty completed the NY Marathon together in 1979. They then moved to San Francisco where Luz obtained her real estate license and gave birth to her son Marty Jr. Luz and Marty moved to San Diego, CA in 1986 and Luz gave birth to their daughter Pamela that same year. While raising her two children, Luz attended Cal State San Marcos where she graduated Suma Cum Laude with a degree in Sociology. Once her children were grown, Luz returned to the workforce as an administrative assistant for an engineering firm. She was then offered an opportunity to work at SHARP Healthcare where she worked until 2019 when she had to retire early due to her illness. Luz loved her time with SHARP Healthcare where she made many close friends.

Luz was a rare creature who enchanted everyone lucky enough to cross her path. She was elegance and grace personified. Luz lived a rich life full of travel and adventure but was happiest at home with her children and grandchildren whom she loved fiercely. Her legacy of love, loyalty, kindness, patience, generosity, strength, and resilience will live on in the hearts and minds of all who knew her.

Per Luz’s request before her passing, there will not be a public funeral service. There will be several masses said in her name in both the United States and Mexico. Please honor her memory in the way that feels most authentic to you. In lieu of flowers, it is preferred that a donation be made to SHARP Hospice in Luz del Carmen’s name.

To send flowers to the family or plant a tree in memory of Luz Del Carmen Williams, please visit our floral store.

You can still show your support by sending flowers directly to the family, or by planting a memorial tree in the memory of Luz Del Carmen Williams
Share a memory
© 2021 California Funeral Alternatives. All Rights Reserved. Funeral Home website by CFS & TA | Terms of Use | Privacy Policy