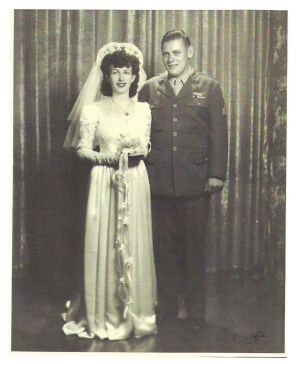 Escondido- Margaret Elizabeth Ward Lorden Gebhart, beloved mother, cherished grammie, great-grandma, aunt and friend passed away peacefully on January 15, 2021 at the age of 102. Beth was born to Thomas and Margaret Steele Ward on August 07, 1918 in Norton, Kansas. She was raised by loving parents, was the second born and first daughter of ten children. At three months old she contracted polio and was not expected to survive. After countless surgeries she proved all wrong, and enjoyed a fulfilling life.

Margaret graduated with honors from Norton Community High School, completed business school in Denver, Colorado and moved to Los Angeles, California. There she later met her beloved husband, Sgt. James Joseph Lorden, and the two were married at St. Basil’s Catholic Church in 1944. Together they founded a very successful photostat business, Lorden Stat Co., which later became the Graphic Process of Los Angeles. They were blessed with four daughters and a son. Beth was honored as the Los Angeles March of Dimes Polio Mother of the Year.

Margaret Elizabeth was a woman of great faith. She was very supportive and an active member of the Sacred Heart Catholic Church in Covina, California. Beth volunteered faithfully for many years in the Comboni Missionaries League and as a guild member for St. Lucy Priory High School. After the death of her first husband, James Lorden, in 1972 she met and married Clarence Gebhart. They resided in both Palm Desert and San Diego County.

Beth was preceded in death by her parents, two husbands, nine siblings, three children ( Victoria Lorden, Maureen MackNair, Jim Lorden) and several nieces and nephews. She is survived by two daughters: Cheryl Jensen, Teresa Whiting (John), in-laws, nine grandchildren, great-grandchildren, nieces and nephews who will all remember her as always having a full cup of joy, wisdom, levity, and genuine goodness to share with everyone. She will also be remembered for her love of playing cards and games, full of her clever antics. One of her most precious memories was attending Ward family reunions. She was very fond of her extended family and kept a special place in her heart for all of them.

As stated by friends and family, Beth was an inspiration, a mentor, a kind soul of positivity, had true interest in others, and was young at heart. She lived a full life and taught others to do the same. She enjoyed a long, happy, faith-filled, and blessed life surrounded by family and friends. She was a one in a million grammie! She lived and laughed and loved and left and the world will never be the same. (James Joyce) May she rest in peace. Amen.

To send flowers to the family or plant a tree in memory of Margaret Elizabeth (Ward Lorden) Gebhart, please visit our floral store.