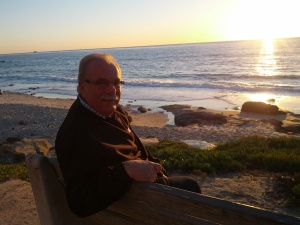 Peter Charles Sara, age 74, passed away peacefully with his wife by his side at the UCSD Jacobs Medical Center on Thursday, January 20, 2022 after a two and a half year battle with pancreatic cancer. He was described by his oncologist as “one in a million.” Pete was a full-blooded Italian and very proud of his heritage. He was a loving husband, devoted father to four and grandfather to four, and a dear friend to many. Pete attended New Life Presbyterian Church since 1982 where he was a member and elder.
Pete was born on March 28, 1947 in Milwaukee, Wisconsin to Peter and Bernadina (Campanelli) Sara. Pete graduated from the University of Wisconsin - Milwaukee with a Bachelors of Science in Special Education where he then taught underprivileged high school students. Pete decided to enlist in the Navy, and after attending bootcamp and electronics school on Treasure Island in the San Francisco Bay Area, received orders to go to Vietnam to repair radios on riverboats. After receiving the necessary shots and paperwork to go to Vietnam, he was notified that his orders had been pulled out of thousands due to his degree in education. There had been a riot in the brig in San Diego and they needed someone with his background to run an educational program for the inmates. Pete was transferred to San Diego where he set up a program with the San Diego Community College District and ran a successful program for the military.
After his military service, Pete was hired by San Diego Community College to run their college. During this time, he attended the University of San Diego and obtained his Master of Arts in History. Pete then met David Chigos who was starting National University (NU) at the time and wanted Pete to run their marketing program which involved going to corporations all over California promoting NU’s unique approach to attending college. Pete became Provost at the new NU Vista campus and took the time to get his Masters in Business Administration. He then attended United States International University (USIU) to pursue his Doctorate in Business and Finance.
Pete then came to the attention of two successful partners in a construction firm, K.L. Wessel Construction, who had just finished building the Vista NU Campus and took notice of Pete’s friendly personality and sharp marketing skills. Pete made the transition from education to construction where he taught himself the ins-and-outs of the industry, and was able to successfully market the company and increase their business from day one. It was during this time that K.L. Wessel was hired to build the new Westminster Seminary campus in Escondido, where Pete met and got to know Mr. Robert den Dulk.
In 1982, Pete met Jennifer, who was the office manager at one of the architectural firms he frequently marketed to, and she was quickly swept off her feet. When they decided to marry, Mr. den Dulk recommended a seminary graduate, Dr. Richard Kaufmann, who had just started a new church, New Life Presbyterian Church, to marry them. A breakfast was set up with the three of them to meet. This meeting was often referred to by Pete as the moment he came to the Lord. Pete and Jennifer were married by Dr. Richard Kaufmann in 1984.
In the following years, Pete worked for Roel Construction and ran their Orange County office. And then, in 2004, at the age of 57, Pete and his good friend Mike Kunzik started Kunzik & Sara Construction, a very successful construction company which continues to thrive to this day. Pete was very proud that his sons and brother-in-law are carrying on the name and continuing the success of the company.
Pete enjoyed traveling, reading, and talking politics and had a passion for gardening – he especially enjoyed attending to his avocado and citrus groves. He spent most weekends fertilizing, pruning and acquiring new plants to adorn the property around his home. He loved riding his Harley motorcycles, which he eventually traded for a motorhome that he and Jennifer enjoyed traveling in over the last two years. Pete was a devoted family man and his wisdom and guidance was cherished by all who knew him.
Pete was a wonderful husband to Jennifer for 37 years, a loving father to four children and their spouses/fiancée/boyfriend – Tony and Heather Sara, Matt and Ashley Sara, Jessica Sara and boyfriend Dan Redifer, and Chris Sara and fiancée Kendra Duncan, and a doting grandfather to four – Jax, Taylor, Cooper and Emily. He is survived by his sister and brother-in-law Trina and Barry Sanborn, his brother and sister-in-law Paul and Jane Sara, and many nieces, nephews, and cousins. Pete was preceded in death by both his parents, Peter and Bernadina (Campanelli) Sara.
Pete’s family wishes to extend a special message of appreciation and gratitude to the entire cancer care staff at UCSD Moores Cancer Center and Jacobs Medical Center.
Your love, support and prayers have been very much appreciated. Pete was a sweet, gentle force of nature and an amazing husband, father, and grandfather. We miss him terribly, but look forward to that day when we will be with him again in heaven.

** In lieu of flowers, the family requests donations be made to New Life Presbyterian Church, Westminster Seminary in Escondido, and the UCSD Pancreatic-Biliary Cancer Research Fund #E4182. Donations can be made online at the following link: https://linktr.ee/petersara

To send flowers to the family or plant a tree in memory of Peter Charles Sara, please visit our floral store.

 How to Donate UCSD - In Memory of Peter Sara