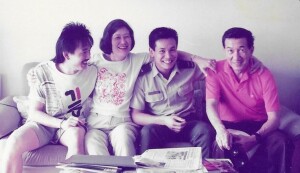 Ronald Ewe Min Sng, resident of California and citizen of the Republic of Singapore, died peacefully in his sleep on Thursday October 29th, 2020 in his San Diego home surrounded by loved ones.

Ronald was born in Singapore on February 11th, 1932 to Sng Choon Yee and Chin Kwai Lean as the eldest of five siblings. He attended Anglo-Chinese School and lived through the Japanese occupation of Singapore in WWII from 1942 to 1945. In 1953, he graduated with a Bachelor of Science degree from the University of Malaya before attending the University of Melbourne and graduating with a degree in Civil Engineering in 1956.

During the 1960’s in Singapore, Ronald compiled an impressive and distinguished resume as a young engineer in several organizations, culminating in multiple public service awards recognizing his considerable contributions to the development of the burgeoning independent republic. A defining achievement from that period included a stint as General Manager of Chartered Industries Singapore where he planned and developed the country’s first small arms munitions industry in three years, an accomplishment made even more remarkable by the simultaneous and unexpected requirement to build a coin mint alongside the munitions factory, a project he ultimately completed in 1968.

The singular event of Ronald’s life from that period however was meeting the inevitable love of his life and soul mate Joo Lee Tan at a Singapore University students dance in 1958. They married in 1964, purchased a bungalow in the Braddell Heights community of Singapore and embarked on the mission of building their family with eldest son Shao Kuan born in 1965 followed by Shao Tien in 1969.

In the 70’s and 80’s, Ronald joined forces with brother Daniel as they ventured into major engineering projects around the world including ones in Indonesia and Saudi Arabia. During this period, Ronald served on the boards of the Singapore National Museum and the Singapore Science Centre and also cultivated an eclectic variety of recreational interests, ranging from power boating the local sea straits to flying private planes to regional vacation destinations.

In 1985, Ronald and his family emigrated to California. Both sons followed in his footsteps studying engineering at UC Berkeley as the family rapidly assimilated into life in Silicon Valley in the 80’s and 90’s. By 1997, the call of a warmer climate and closer family ties beckoned, resulting in another family move, this time to San Diego where he would remain to live out the rest of his years. Ronald found the house of his dreams in a sprawling single level nestled in the Poway hills that had the combined advantage of peerless views of the surrounding hills and proximity to Joo Lee’s siblings. San Diego proved an ideal base to indulge the interests of Ronald’s senior years. Frequent travel to far flung global destinations were interspersed with regular pilgrimages to Singapore to visit relatives and restaurants (not necessarily in that order), and road trips around the US. Closer to home, days and evenings were opportunities to enjoy the mild weather and simple pleasures of life, whether playing golf on nearby courses, gambling in local casinos or savoring good meals amongst family and friends.

Besides his wife and two sons, Ronald is survived by brothers Daniel and Jimmy, and sister Letty.

To send flowers to the family or plant a tree in memory of Ronald Ewe Min Sng, please visit our floral store.

You can still show your support by sending flowers directly to the family, or by planting a memorial tree in the memory of Ronald Ewe Min Sng
Share a memory
© 2020 California Funeral Alternatives. All Rights Reserved. Funeral Home website by CFS & TA | Terms of Use | Privacy Policy