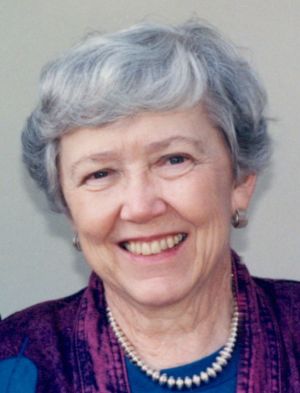 Sarah Scroggins Swofford passed away on Friday, April 17, 2020, at her home in San Diego, California. She was 95 years old.

A true daughter of the West Texas Panhandle, Sarah was born on October 25, 1924, in Plainview, Texas, to Claude and Grace Scroggins. Sarah and her older sister Corinne grew up first on their parents’ cotton farm in Hale County and later in a house in the county seat of Hale Center, Texas, where their father served as a rural mail carrier alongside farming.

Sarah graduated from Hale Center High School in 1942 as valedictorian of her class. There she met her future husband, Ray Swofford, who attended the school during their senior year and whose mother was their senior English teacher. Sarah and Ray both attended Texas Technological College in Lubbock, Texas, where she studied architecture and commercial art and received her B.A. in 1946.

Sarah and Ray were married in June 1945 at Camp Endicott, Rhode Island, where Ray received his Navy commission after graduating from Midshipman school. Sarah waited in Lubbock while Ray completed several tours with naval occupation forces in the Pacific Theater during 1945 and 1946. Ray returned to Sarah and completed his B.S. in civil engineering at Texas Tech in 1947.

Having lived through the Great Depression, the Dust Bowl, and World War II and completed their college educations, Sarah and Ray moved to Baytown, Texas, in 1947 to establish a new home as a young married couple. Ray began work as a civil engineer for Humble Oil and Refining Company, later Exxon, and Sarah began preparing for the arrival of their first child in October 1947. They had three children – Pierce, Debbie and David – and were blessed with six wonderful grandchildren.

Sarah and Ray were very active in the Baytown community. They were avid bridge players, and Sarah participated in the Le Livre book review club. They were faithful members of St. Mark’s Methodist Church. Both were active in the local American Field Service (AFS) chapter.

As the children grew older, Sarah began to seek ways to serve her community and expand her horizons beyond the role of homemaker. During the 1968-69 school year she taught middle school grades at St. Joseph’s Catholic School in Baytown, which required an enormous effort for someone not formally trained as a teacher. Later, during the 1970s and 80s, Sarah found her true calling while serving as a reference librarian and later as assistant librarian for public services at Sterling Municipal Library in Baytown. She relished the daily adventure of helping library patrons locate information or materials they were seeking, all the while learning new and interesting things herself. She treasured the camaraderie she found with like-minded colleagues on the library staff. She especially enjoyed her early role in developing the library’s oral history project and can still be heard today in the taped interviews she conducted with early citizens of Baytown.

Sarah and Ray were members of the Goose Creek Country Club, where they enjoyed many of the club’s social activities and celebrated and shared their 50th wedding anniversary in 1995 with a large gathering of friends and family.

Sarah and Ray loved to travel and spent their retirement years traveling to various parts of Europe including visits with Pierce and his family, who spent many years during this period in government service in Germany, Spain, and Austria.

They also enjoyed traveling to Austin, Texas, and San Diego to visit David and Debbie. In 1999, they moved to San Diego to spend their golden years in beautiful Southern California.

Funeral services will be held on an as yet undetermined future date at Miramar National Cemetery in San Diego, where Sarah’s ashes will be buried next to those of her husband.

In lieu of flowers the family requests that donations be made to Sterling Municipal Library in Baytown, Texas. Please make donations in memory of Sarah Swofford at https://bit.ly/DonateSterlingLibrarySwofford.

Sarah was kind, humble, and conscientious. She loved her husband and family, she loved Texas, and she loved her country. She and Ray were married more than 73 years. Sarah had a deep appreciation for learning and education; she embraced new experiences offered by travel and had a special fondness for architecture, history, and the beauty of nature. She was a loyal friend and had an easy sense of humor. Her friends and family will always miss her quiet wisdom, gentle counsel, and reliable support. She left the world a better place than she found it.

To send flowers to the family or plant a tree in memory of Sarah Scroggins Swofford, please visit our floral store.

You can still show your support by sending flowers directly to the family, or by planting a memorial tree in the memory of Sarah Scroggins Swofford
Share a memory
© 2020 California Funeral Alternatives. All Rights Reserved. Funeral Home website by CFS & TA