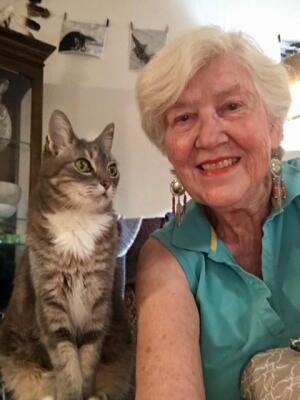 Suzanne Harrison Emery, a longtime educator and civic volunteer of Poway, California, died of cancer on October 11, 2020. With her daughters, Krysty and Kathleen, and grandson, Nyack, by her side, a friend and Kumeyaay tribal elder sang Native American songs to carry her on her passage. She was 77.

Suzanne was born on September 20, 1943, in Del Rio, Texas, to Benjamin Harrison Jr. and Margaret Irene Muter. She and her younger brother Benjamin (Benny) were “military brats”–always on the move with her father’s naval career. The Harrisons lived at a variety of US military base locations, including North Carolina, Hawaii, Puerto Rico, and California. Suzanne boasted 31 addresses and attended eleven schools before graduating from Oceanside High in 1961. She then attended Oceanside-Carlsbad College, where she was the student body president in 1963, before completing her undergraduate work in journalism at San Diego State University (then San Diego State College, as she would always say). She remained at SDSC to earn her master’s degree in education.

While at San Diego State, she borrowed notes from a fellow student before missing several lectures due to illness. With no way to get in touch or return the notes, the student ended up failing the upcoming exam, or so he had claimed. But he did not hold a grudge; that student was Robert “Bob” Cummins Emery, who would become the love of Suzanne’s life. They were married July 8, 1967, in San Diego. Shortly after, they discovered a place they could call home: Poway. Suzanne became a well-known figure and popular First Lady of Poway, the city Robert helped incorporate in 1980, where he went on to serve 28 years on the City Council with many terms as Mayor. She designed the concept for the original city logo featuring the old Poway oak, and took great joy in designing the City of Poway Christmas cards for years featuring that logo.  Recently, Suzanne had been volunteering for the Poway Historical Society and had been named to the Board of Directors earlier this year.

Suzanne worked for a time at the Daily Californian in El Cajon. It was perhaps this stint as a reporter that that helped lead her towards her true professional calling in 1966, when she began teaching high school English and journalism—a career that would span more than three decades and influence hundreds of budding writers, photographers and journalists, including many who remained in touch until her death.

Known affectionately as “Auntie Em” to her students, she taught English and journalism at Morse and Madison high schools in San Diego until 1976 when she joined the inaugural teaching staff of Mira Mesa High. At Mira Mesa, she enjoyed guiding the yearbook staff and was the advisor for the Marquee newspaper for more than twenty years, until her retirement in 2002. Many of her students achieved professional success in the field of journalism; seeing their name in a byline, she would always send a note expressing her pride (and often a few unsolicited edits).

Suzanne was heavily involved in education, both in and out of the classroom. In 1979, she received the California Teachers’ Association We Honor Ours (WHO) award for exceptional leadership and activism. She went on to serve as a union delegate for the San Diego Education Association for many years, traveling to the national conventions each summer to represent state and local teachers.

Never one to be idle, Suzanne had several journalistic occupations on the side, most notably SheEditions, a one-woman publishing, design, and photography service catering to the needs of the local teachers’ associations. SheEditions was involved in the creation and production of the SDEA Advocate, Retired Advocate, and CTA Communique newsletters for more than two decades, continuing even after she had retired from teaching.  In addition to professional design, Suzanne’s creativity was present in so many other ways–she enjoyed calligraphy, sewing, making her own jewelry, and creating themed birthday parties for the girls complete with hand drawn invites and imaginatively decorated cakes to match.

Retirement gave Suzanne and Bob time to volunteer as Reserve Park Rangers for the City of Poway, helping to keep parks safe and providing support during community events. When not in Poway, the two could be found enjoying Anza Borrego Desert, which became a favorite getaway for the duration of their life together. She and Bob were volunteer site stewards for the Mine Wash archeological site in Anza Borrego Desert State Park, regularly monitoring the site and keeping it free of debris and vandalism. Even after Bob’s death, she continued her steward duties and frequently led site tours for family and friends down the bumpy off-road section of the park. Suzanne enjoyed volunteering at the Anza Borrego Desert Natural History Association for more than 10 years.

After retirement, she combined her love of learning and interest in local Native American culture at Palomar and Kumeyaay community colleges, where she studied Native American history and culture. She shared this passion with others, serving as an advocate, board member, and docent at Poway’s Kumeyaay-Ipai Interpretive Center. There, Suzanne could often be found leading walks and identifying native plants for visitors. Most recently, Suzanne spent time volunteering as a teacher’s assistant in a middle-school English classroom at the Tuba City Boarding School on the Navajo Reservation in northwestern Arizona, a journey she was very proud of.

An avid photographer, she continued to document her community and family, as well as her deep appreciation of the world’s natural beauty in her travels by car and river boat. Her daughters recall “star parties” when they were young–warm Poway nights when they gathered outside and listened to their mother point out stars, planets, and constellations. She could be counted on to plan educational, (yet still fun) adventures for her daughters and their friends. She continued this tradition of educational field trips to the next generation and delighted in traveling far and wide with her adored grandson, Nyack. She coined her own nickname, “GrandZanne,” for Nyack, which was quickly adopted and used affectionately by many. She enjoyed the theater and was an annual subscriber for more than twenty years to both the Poway Center for the Performing Arts and the Lambs Players Theatre.

Suzanne was an active member of the Community Church of Poway for over forty years. She initiated the tradition of taking photos of church members and displaying them at the church entrance back in the ’80s with the goal of encouraging folks to get to know one another.

Suzanne loved parties, wearing bright colors, and hats.  An avid birdwatcher, she was always on the lookout for hawks and other notable species. She was a collector of many things, as anyone who visited her home could see.  She preferred enjoying a meal over preparing one, loved a good drive-thru French Fry, and could be easily bribed with dark chocolate.  She loved her daughters and always told them how proud they made her. She adored her grandson, whom she described to anyone and everyone as “the perfect grandson”.  More than anything, she loved Bob and the amazing life they had together.

Following her death, her daughter Kathleen found many instances of the same quote throughout Suzanne’s notes, attributed to Theodor Geisel: “Don’t cry because it’s over, be happy that it happened.”

Suzanne is survived by her children, Krysty M. Emery of Sacramento, California, and Kathleen S. Emery of San Diego; grandson, Nyack Emery; her best friend of 55 years, Mitzi Swift of Coronado, California; sister-in-law Joyce Cook of Aurora, Colorado; numerous cousins and her cat, Vegas, who will now live with Kathleen and her dog, Harrison. She joins her family at rest: her husband Robert, who passed in 2015, and brother Benjamin in 2012.

A small service in accordance with current pandemic restrictions will be held online and at the Community Church of Poway on Saturday, November 14th at 10:30 AM. There will be a live stream of the service available for mourners who may opt to attend from the safety of their home. You can get more information about the event here:  https://pp.events/aj52Nx0v .  A celebration of Suzanne’s life will be planned when we can once again gather safely. She will be interred at Dearborn Memorial Park in Poway.

In lieu of flowers, memorial donations can be made to any of the following organizations that brought Suzanne so much joy:

Community Church of Poway, Chapel Fund: Donations can be made online: https://www.ccpucc.org/electronic-donation

To send flowers to the family or plant a tree in memory of Suzanne Harrison Emery, please visit our floral store.

Kumeyaay Community College: Donations are accepted by check made out to the Sycuan Band of the Kumey
1 Kwaaypaay Court, El Cajon CA 92019