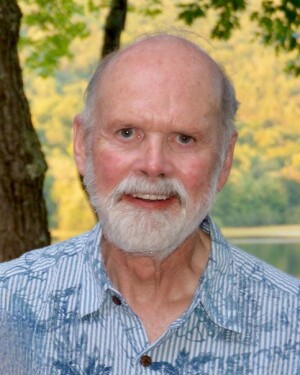 Thomas Andrew Campbell died on December 24, 2021, at age 77 in San Diego, CA, surrounded by his beloved wife and children. He fought a courageous battle with Parkinson’s disease for 11 years prior to his death.

Tom was born on May 16, 1944, in Enfield, NH. He had many fond memories of his childhood. His days were spent playing sports, collecting coins, delivering The Valley News, serving as an altar boy at St. Helena Catholic Church, and cutting countless lawns to earn money for college. At 18, he joined the Navy’s Reserve Officers’ Training Corps and left Enfield to attend the University of Illinois. It was there he met his wife of 54 years, Diane Koerner, of Niles, IL. After graduating with a degree in Statistical Economics, Tom was commissioned into the U.S. Navy. On February 4, 1967, he and Diane were married in Niles.

Tom and Diane started their married life in Athens, GA, and then moved to Long Beach, CA. While stationed there, Tom served two tours in Vietnam aboard the U.S.S. Valley Forge as a Supply Corps Officer. It was in Vietnam that Tom was exposed to the neurotoxin Agent Orange, later linked to the development of his Parkinson’s disease.

Tom later served in Washington, D.C., Ethiopia, and Ohio. After 10 years of active duty, he joined the Navy Reserve. He started a civilian career as a computer scientist and earned a master’s degree in operations research at night, graduating from Case Western Reserve University.  He also became CPA certified.  He began a government career working for the Department of Defense in VA. In Tom’s various positions, he made numerous contributions to our nation, including managing data for the Vietnam War Memorial and for veterans of foreign wars, which helped countless families discover previously unknown information about their loved ones. Tom was recalled by the Navy to active duty during the Persian Gulf War, where he served at the Pentagon. He retired as a Commander after 27 years of service. In 2007, Tom retired from the Office of the Secretary of Defense in Washington, D.C. He and Diane moved to Nipomo, CA, where they lived happily retired for 15 years.

With his kind, blue eyes and sweet, gentle soul, Tom had a calming presence everywhere he went. He had unwavering loyalty for his wife and three daughters. He relished all intellectual challenges and could often be found playing chess, creating complex games, designing new inventions, updating his extensive genealogy database, or trying to unravel the missing pieces in Parkinson’s disease research. He was a talented and astute bridge and pinochle player and loved the many games he played partnered with Diane. He particularly enjoyed playing ping-pong with his children and grandchildren.

Tom and Diane were avid travelers and delighted in traveling each summer to a new location with their children and grandchildren. They all celebrated Tom’s 75th birthday in Ireland. In addition, Tom and Diane took many vacations abroad to the far reaches of the globe.

Tom lived a full and meaningful life.  He was a good husband, father, grandfather, son, brother, uncle, and friend.  He was preceded in death by his parents, George and Anna Campbell, and his grandparents, Wayne and Mae Campbell and William and Catherine Laffee.

He is survived by his wife, Diane Campbell; daughters Kerry Campbell, Kristin [Daniel] Hall, and Shannon [Tony] Davis; and seven grandchildren: Anna Schorr; Noah Hamilton; Paulina, David, and Elena Hall; and Colvin and Sylvia Davis. Tom is also survived by his brother, Paul Campbell, and stepsister, Jerianne Ashley.  Tom was well-loved and will always have a special place in our hearts.

Tom was dedicated to supporting research for Parkinson's disease. He donated his brain to the Brain Support Network to contribute to the search for a cause, treatment, and cure for this debilitating disease.

In lieu of flowers, the family requests charitable contributions in memory of Tom Campbell be made to Brain Support Network, PO Box 7264, Menlo Park, CA 94026, www.brainsupportnetwork.com

To send flowers to the family or plant a tree in memory of Thomas A Campbell, please visit our floral store.

A Memorial Tree was planted for Thomas

You can still show your support by sending flowers directly to the family, or by planting a memorial tree in the memory of Thomas A Campbell