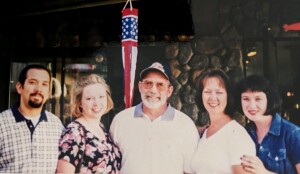 Tom Wilson was born in Long Beach, CA on June 27, 1950. He was the third in a family of eight children. When he was three years old his family moved to Grosse Pointe, Michigan. This explains his unwavering support for the Detroit Lions and the Detroit Tigers. He was a loyal fan through their triumphs and defeats.

Tom and Loreen met while they were both in college and working at the same restaurant. They eloped and were married in San Francisco on August 21, 1970. Shortly after, Tom was drafted into the army during the Vietnam war. He served two years in the army at Fort Ord and was Honorably Discharged in March 1973.

Tom and Loreen were blessed with two daughters. Jodie was born in May of 1971. Tom was overjoyed to have a daughter and was a natural when it came to being a Dad. In August 1976 Becky came along. Tom enjoyed their childhood just as much as they did. He would dress up for Halloween, build forts in the family room, coach softball, and took family vacations to national parks.

Tom worked for the USPS for 35 years, in Orange County and San Diego County. He enjoyed working many positions throughout the years, cancelling mail, traveling with a national AIMS team, and finally retiring as an executive in San Diego. He retired a few years early due to the effects of the dystonia on his eyes and his speech.

Tom and Loreen enjoyed retirement to the fullest. They were active and loved to walk, hike and play golf. Once retired, Tom discovered he had more time for his beautiful gardens. He also enjoyed mentoring his daughters and helping in their gardens in Colorado. Retirement also gave them the ability to travel more. Tom loved road trips to see his siblings in Canada, Northern CA and to see his daughters, son-in-law and grandsons in Colorado, except when it was below 40 degrees. Papa Tom preferred the weather and climate in Hawaii and they treasured their annual trips to the islands.

Tom was a fighter and a survivor. He courageously fought various cancers for 34 years, starting at the age of 46. In addition to fighting cancer, he lived with painful physical impairments brought on by dystonia. He was our miracle man.

To send flowers to the family or plant a tree in memory of Thomas Dean Wilson, please visit our floral store.

A Memorial Tree was planted for Thomas

You can still show your support by sending flowers directly to the family, or by planting a memorial tree in the memory of Thomas Dean Wilson
© 2022 California Funeral Alternatives. All Rights Reserved. Funeral Home website by CFS & TA | Terms of Use | Privacy Policy | Accessibility