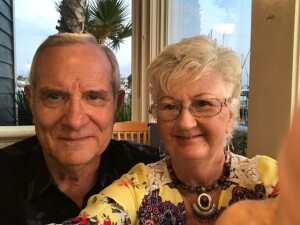 Born in Sacramento, California on April 3, 1945, Bill was the first of three boys born to Robert and Marjorie Benson.  As the oldest, Bill always felt responsible for his younger brothers, Richard (Ben) and Robert (Bobby)  (yes, father Bob and sons Bill, Ben, and Bobby)

Bill was very involved in both church and scouts while growing up.  At 12, he became one of the youngest to achieve Eagle Scout status.  At around this same time, he was also chosen as “Jr. Mayor” for the City of Oakland.  Summers were often spent at Mission Springs, a Christian camp in the Santa Cruz mountains. He loved skiing, golf and fast cars, which he shared with his dad and his brothers.

Bill graduated from Encina High School in 1962, where he was active in the rifle club, a lifelong interest.  He began college, where he was very involved in Young Life, but left school and joined his father in the family business, Sacramento Iron Works.  Bill’s career as General Manager of the Iron Works was interrupted when he was summoned in 1969 to serve in the Army.  He joined many other young men in Vietnam at the height of the war, where the Army put his natural accounting talents to work . Bill served with honor and pride in his country, and kept his National Defense Service, Sharpshooter and Vietnam medals in a “treasure box” that he had made in high school.

After returning from the Army, Bill decided to accept an offer as an accountant with the company that was building a new community in Rancho Bernardo.  He joined Calvary Covenant Church in Poway, and began his life in Southern California.  During this time, Bill returned to school at night, and earned his Business Administration/ Accounting degree from National University.

In 1980, Bill accepted a friend’s suggestion to try a “blind date”.  This meeting was not an immediate success, but Bill’s persistence eventually won, and when Nancy asked him about his goal in life, his answer that he wanted to be a Godly man sealed the deal.  In September of 1981 Nancy Gorman became Mrs. Nancy Benson, adding two young sons to Bill’s family.  Christopher (13) and Travis (11) both took the last name Benson, and the new family was formed.

The Benson family was very involved in Calvary Covenant Church until the church dissolved.  Bill and Nancy soon discovered New Life Presbyterian Church in Escondido, and remained active members for over 30 years.

Bill’s friends and relatives would all agree that he was a quiet man – more comfortable with numbers than crowds.  But he served behind the scenes at New Life for many years, running audio/visual equipment, counting the offerings, acting  as an usher, and helping where he could.  He especially loved the annual “Desert Shootout” with his good friend, Wes, where they got to exercise their sharpshooting skills.

In spite of being the quiet, behind the scenes man, Bill generously supported Nancy in her many “schemes”, from dressing up for How to Host A Murder parties and Christmas programs, to her running an historic costume rental business from their home after retirement. They took in several homeless “guests” throughout the years, as well as a young family for the last four years.  Bill gave up his privacy and his master bedroom to support Elida as a “daughter” with her two toddlers while she completes her schooling.

Perhaps more than anything else, this willingness to step out of his comfort zone is what Nancy loved and appreciated about Bill.  His unwavering faith served as an example for everyone.

William is survived by his two brothers, Richard Benson of Scotts Valley, Ca, and Robert Benson of Carmichael, Ca, his two step-sons, Christopher of Campbell, California, and Travis, of Loveland, Colorado.  He also had three granddaughters and was known as “grampa” by the two little ones living in the house.

To send flowers to the family or plant a tree in memory of William "Bill" Benson, please visit our floral store.